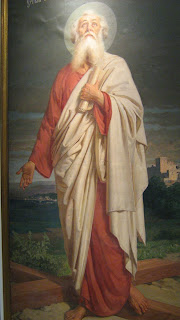 Uroš Predić
Saint Andrew the First Called
1926
It is somewhat easier to discuss Uroš Predić since he composed an autobiography, wrote about himself and other artists, readily responded to questions and saved correspondence with friends that was full of observations about life, society, politics, science and art, which made it possible to consider him as one of the greatest intellectuals among Serbian artists.The subjectivity of those written texts is minimal because the main charecteristic of his works, as well as of his long life, was conscientiousness.Though without a personal family life and without children '' The obscure power of fate hovers above all human endeavours'' , in some of his paintings, he sends the message that '' Without protecting public welfare, there cannot be individual happiness and progress.''

From:
Three Century of Serbian Painting, Miodrag Jovanovic
Posted by Theodoré at 8:42 AM