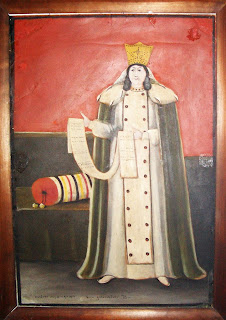 Tamar ( (c. 1160 – 18 January 1213), of the Bagrationi dynasty, was Queen Regnant of Georgia from 1184 to 1213. Tamar presided over the "Golden age" of the medieval Georgian monarchy.Her unique position as the first woman to rule Georgia in her own right was emphasized by the title mep'e ("king"), commonly afforded to Tamar in the medieval Georgian sources.

Tamar was proclaimed heir apparent and co-ruler by her reigning father George III in 1178, but she faced significant opposition from the aristocracy upon her ascension to full ruling powers after George's death. Nevertheless, Tamar was successful in neutralizing this opposition and embarked on an energetic foreign policy aided by the downfall of the rival powers of the Seljuqids and the Byzantine Empire. Supported by a powerful military élite, Tamar was able to build on the successes of her predecessors to consolidate an empire which dominated the Caucasus until its collapse under the Mongol attacks within two decades after Tamar's death.
Posted by Lukas Andonevich at 4:05 AM