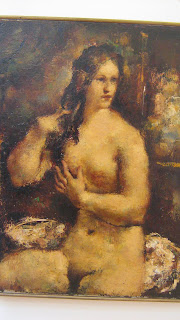 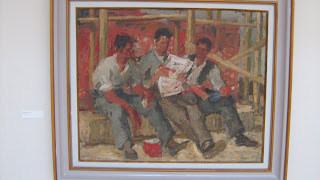 Djordje Andrejevic-Kun
Odmor
Djordje Andrejevic-Kun was a Serbian painter of 20th century. He is frequently cited as one of known Yugoslav painters, and a member of Serbian Academy of Sciences and Arts. He is well-known by his monumental and realistic compositions and graphic maps where he presented crimes of the occupation armies during World War II, and also by his motifs of reconstruction and renovation of the country after the war. He was professor of the Belgrade Academy of Arts. He painted a lot of oil paintings, made a lot of prints and illustrated many books. His work was influenced by Georg Grosz and Franz Maserel.

The inventory of his work lists some 300 paintings. More than 60 are in museums in the country and abroad, about as many are owned by government institutions and enterprises, and the rest are in private collections. Over 1000 drawings are listed; most of them are in museum collections. The few surviving complete, first-print sets of Blood-soaked Gold and For Freedom are owned by museums in Belgrade. He has three mosaics, one at the War Memorial in Ivanjica, a second on the façade of a public building in Kragujevac, and the third at the Holocaust Museum in Paris.

During 1944 wide purges under bolshevik auspices in Belgrade following the city's liberation from the Nazis by the Soviet Red Army and Yugoslav Partisans, 40-year-old Andrejević-Kun moved into the apartment belonging to painter Branko Popović only few days after Popović got executed by the new communist authorities. The quickness and manner with which Andrejević-Kun moved took his dead coleague's property (Popović's surviving family: his wife Divna and their three children Simeon, Prijezda, and Borivoje were in the meantime kicked out of the apartment by the authorities) raised questions that Popović's prominently located property at 24 Knez Mihailova Street was the real reason behind Popović's execution without trial.