After the conquest of Istanbul, a number of Byzantine churches were transformed into mosques.Because St. Sophia was the grandest of them all, by tradition it became the Great Mosque of Istanbul.Others were adapted to serve as the mosquess of various educational centres.Intensive transformation of Byzantine structures into mosques occurred especially during the reign of Mehmed II, and the tradition was contunied by the viziers and grand viziers of Bayezid II. 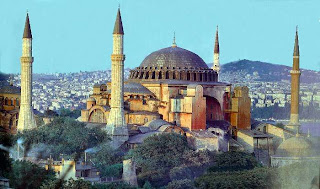 From the date of its dedication in 360 until 1453, it served as the Greek Patriarchal cathedral of Constantinople, except between 1204 and 1261, when it was converted to a Roman Catholic cathedral under the Latin Patriarch of Constantinople of the Western Crusader established Latin Empire. The building was a mosque from 29 May 1453 until 1931, when it was secularized. It was opened as a museum on 1 February 1935 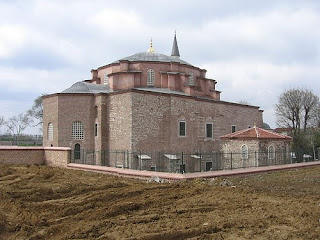 Little Hagia Sophia formerly of the Saints Sergius and Bacchus Church of the (Greek: Eκκλησία τῶν Άγίων Σεργίου καί Βάκχου ὲν τοῖς Ὸρμίσδου), is a former Eastern Orthodox church dedicated to Saints Sergius and Bacchus in Constantinople, later converted into a mosque by Huseyin Efendi, the head of Bayezid 2, who is buried in a tomb within the courtyard of the complex. 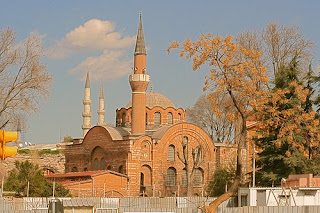 Kalenderhane Mosque (Turkish: Kalenderhane Camii) is a former Eastern Orthodox church in Istanbul, converted into a mosque by Mehmed 2.It has recently been identified as the church of St. Saviour Akaleptos. 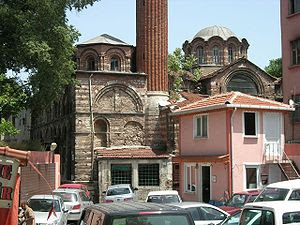 Vefa Church Mosque (Turkish: Vefa Church Mosque, meaning "the church mosque of Loyalty", to distinguish it from the other churches mosques of Istanbul: Blue Mosque also known as Mullah Gürani after the name of his founder) is a former Eastern Orthodox church.The conversion took place during the reign of Mehmed 2, It was Molla Gürani, sheikulislam, who transformed the church into a waqf founded in 1484 by mosque.A Gürani and signed by Mullah Ali bin Yusuf-ul Fenari, provided for the upkeep of this structure with income from a group of buildings in the mahalle of Sheik Vefa.


5. Bodrum Mosque or the Mesih Ali Paşa Camii, The Church of Myrelaion 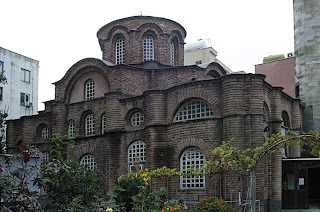 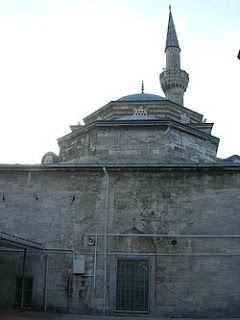 Koca Mustafa Pasha Mosque is a former Eastern Orthodox church converted into a mosque by the Koca Mustafa Pasha , grand vizier of Bayezid2, in 1486. The church, as the adjoining monastery, was dedicated to Saint Andrew of Crete, and was named Krisei or by-the-Judgement of Saint Andrew (Greek: Μονὴ τοῦ Ἁγίου Ἀνδρέου ἐν τῇ Κρίσει, Mone tοu Hagiοu Andreοu Krisei at least). 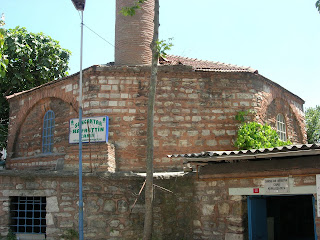 Sancaktar Hayrettin Masjid is part of a former Eastern Orthodox monastery converted into a mosque by Hayrettin Effendi, Sancaktar (standard-bearer) of Sultan Mehmed II, converted the building into a mescit (oratory) and was buried there. It is generally believed that the small building belonged to the Byzantine Monastery of Gastria (Greek: Μονῆ τῶν Γαστρίων, Mone Gastríōn tons, meaning "Monastery of the Vases"). The edifice is a minor example of Palaiologan architecture in Constantinople, and is important for historical reasons. 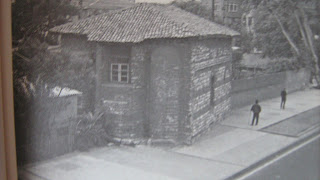 It s Turkish name, that is to say, Manastir ( Monastery ) indicates that in Byzantine times it was a part of a monastery, very probably of the Monastery of Kyra Martha.It was Mustafa Chavush . a subject of Mehmed 2, who turned the building into a masjid, the expenses of which were provided by a waqf of the Sultan. 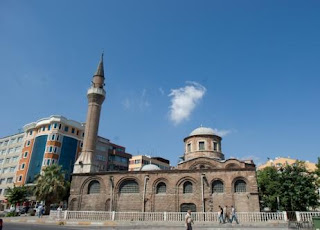 Fenâri Îsâ Mosque is a mosque in Istanbul, made of two former Eastern Orthodox churches.The north church was buildt by Constantine Lips, a dignitary at the court of Leo 4 in 907.After the Latin occupation the Empress Teodora, the consort of Michael VIII Palaeologus( 1260 / 1280 ), Restored the building and added the South Church.The new church was dedicated to St. John the Baptist.


10. The Zeyrek Kilise Mosque , The Church of St. Saviour Pantokrator 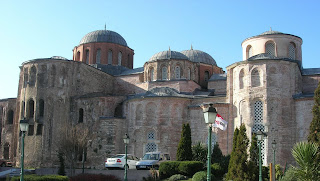 Zeyrek Mosque ( Known as St. Saviour Pantokrator ), is a mosque in Istanbul, made ​​of two former Eastern Orthodox churches and a chapel, the structure was buildt between 1120 and 1136. It represents the most typical example of architecture of the Byzantine middle period in Constantinople and is, after Hagia Sophia, the second largest religious edifice built by the Byzantines still extant in Istanbul.

Soon after the Ottoman conquest the complex was entirely transformed and dedicated to the Mehmed II.Molla Zeyrek Efendi was appointed as the first muderris of the madrasa, hence the Turkish name of the edifice. 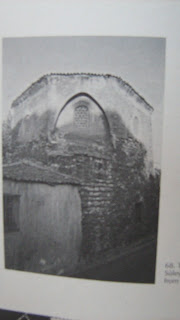 Sheikh Suleyman Masjid is a Byzantine building which was converted from a former part of the Eastern Orthodox Monastery of Pantocrator. Its usage is unclear during the Byzantine era. The small building is a minor example of the architecture of the Byzantine middle period in Constantinople.The building was turned into a masjid by Sheikh Suleyman of Mehmed II. 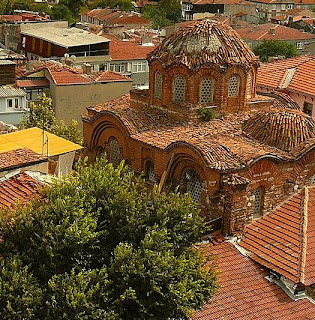 The church has traditionally been identified with that belonging to the Monastery of Christ Pantepoptes, meaning "Christ the all-seeing". It is the only documented 11th-century church in Istanbul which Survives intact, and represents a key monument of the middle Byzantine architecture. The founder was Anna Dalassena, mother of Alexius I Commenus ( 1081/1118)

Not long after the conquest the church was converted into a mosque, it was Mehmed II who established a waqf provide for the expenses of its personnel.


13. Hirami Ahmet Pasha Masjid , The Church of St. John the Baptist in Trullo 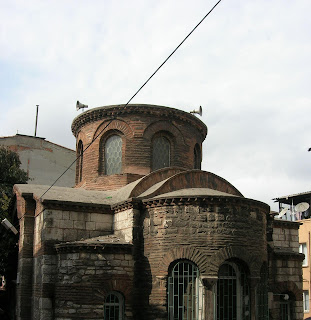 The small church, one dedicated to Saint John the Baptist in Trullo, but it is not known when or by whom it was buildt.The date of construction is thought to be in the twelfth century.
The church was not converted into a masjid for some time after the conquest.It was Ahmed Pasha, sheikhulislam, also identified with the title Hirami, who turned the buildind into a masjid ( 1591/1599 ) 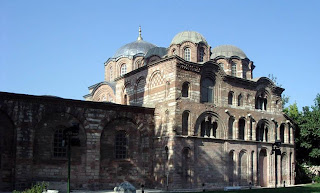 Situated at Carsamba, at the edge of the Fifth Hill, this building contains a south church, now museum and a north one is mosque.This was still in use as a church of the Byzantine Pammakaritos (All of the Blessed Mary) Three years after the conquest, the church Became the Patriarchal seat of Istanbul.

Because of disagreements between the monks and Government Officials, this building was taken from them, and then converted into a mosque in the reign of Murad III, in the year when Georgia was conquered, hence the Turkish name of Fethiye (Conquest), given to the edifice .


15. The Kefeli Mosque , The Monastery of Manuel 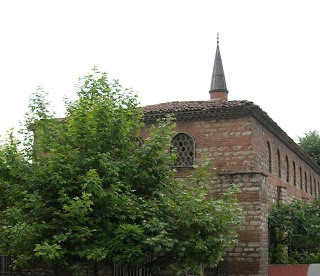 The Kefeli Mosque is a former Eastern Orthodox church, later jointly officiated by Roman Catholics and Armenians, and finally converted into a mosque by the Ottomans.It was converted by an anonymous person from Caffa around 1630, hence the Turkish name of the building. 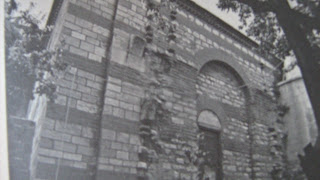 Built during the Byzantine era as the Santa Maria di Constantinopoli church, it is also possible that this structure was the Petra Monastery or the Philanthropos Monastery built by Aleksios Komnenos I, where he wanted to be buried upon his death.Kasim Aga was not the builder but rather the person responsible for its conversion into a masjid.The Istanbul Vakiflari Tahrir Defteri of 1546 shows that the waqf had an extensive evkaf throught the city. 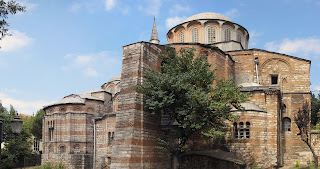 The Church of the Holy Savior in Chora is Considered to be one of the most beautiful examples of a Byzantine church.The church is situated in the Istanbul, in the Edirnekapi neighborhood, which lies in the western part of the municipality (council) of the Conqueror.

The conversion into a mosque took place during the reign of Bayezid II, for it was Atik Ali Pasha, the grand vizier at the time, who converted it and founded a waqf for it.In 1546, it was registered under the name of Kenise Camii. 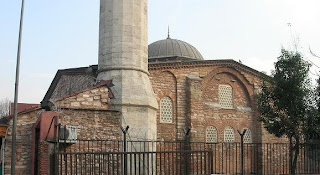 The dedication of the church is obscure. For a long time it has been identified with the church of Saints Peter and Mark, but without any proof, and Semavi Eyice identifies it with a church of Saint Thecla of Blachernae church was buildt in ninth century. 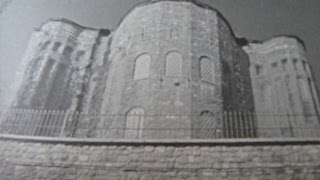 It is either identified with the church belonging to the nunnery of Saint Theodosia or with that of the monastery of Christ the Benefactor.In era of Selim II turned the church into a mosque, However , in the Istanbul Vakiflari Tahrir defteri of 1546 there is a record of a mahalle under the name Gul Mosque.

Converted Byzantine Churches in Istanbul--their Transformation Into Mosques and Masjids - Suleyman Kirimtayif
Posted by Lukas Andonevich at 7:09 AM