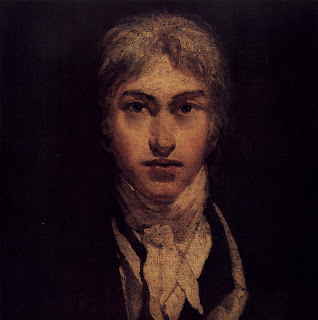 Joseph Mallord William Turner
Self-portrait
c.1799 , Oil on canvas
London, Tate Britain
Turner began his studies at the Royal Academy, in 1789, and was already exhibiting in 1790.He was inspired by Thomas Girtin and John Robert Cozens, and painted his first landscape in 1796.He visited Switzerland and France in 1802.From then on, he frequently traveled around Europe, especially in France.In 1807, he was appointed as professor on perspective at the Royal Academy.In 1819 he produced watercolour illustrations for James Hakewill's Picturesque Tour of Italy and went to Italy for the first time.He visited the Lakes, Venice, Rome ( Where he het Antonie Canova ), Naples and Paestum.In January 1820 he returned with 90 full skecthbooks, sources of inspiration for is future paintings.From 1830, he was often a guest of Count Egremont at Petworth, where his paintings included lush floral compositions.