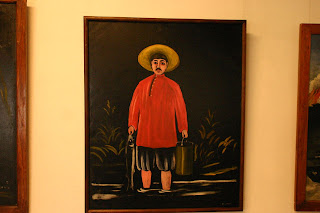 Georgian painter. He was orphaned at an early age and brought up by his father’s employer in Tbilisi. He worked first as a brakesman on the Transcaucasian Railway, then, following a brief and financially unsuccessful foray into business, he became an itinerant painter of signboards, windows and murals, working mainly for the shopkeepers in and around Tbilisi. He had no special schooling and evolved his own naive style based upon the colours, rhythms and spatial concepts of Georgian folk art.

Posted by Lukas Andonevich at 6:24 AM