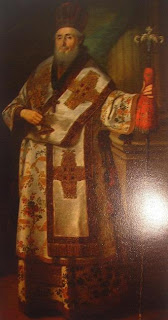 Arsenije Teodorović
Bishop Kiril Zivkovic
1799
Serbian Orthodox Church Museum, Belgrade
After the Collapse of the medieval Serbian state, followed by the enslavement of the population, a systematic concealment of the treasures began.At the time, it was impossible to render them avaible for wiewing, let alone display them.It was only after the foundation of the modern Serbian state early in the 19th century, and several decades upon its consolidation, that the idea of opening museums in general, and later on church museums, was gradually realized.In 1886, the first appeal was sent out concerning the founding of a museum for the See of the Metropolitaneate of Karlovci.Forty years later the Assembly of Bishops of the Serbian Orthodox Church enacteda decision in Sremski Karlovci to found a church museum and a partriarche Library for the entire terrority of the united Serbian Orthodox Church..The aim of this museum was to reflect the entire development of the Serbian Orthodox Church, at various times and in various places, wşthout stressinh any particular diocese, personality or epoch to the detriment of the whole.

Svetozar Dusanic/Serbian Orthodox Church Museum
Posted by Theodoré at 9:23 AM