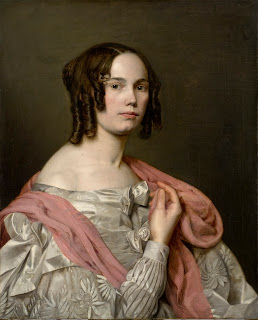 One hundred years separated two major abd decisive points in the development of modern Serbian painting.The first one marked by Hristofor Zefarovic in Bodani in the midle age of 18th century, the other by Katarina Ivanovic in the Middle of the 19th century with her decision to continue artistic studies at the Academy in Munich.The road to Bavarian arts school went via the lessons at the Best painter Jozef Pesky.As a 25 years old student she was christened in the women's department at the Academy of Figurative Art in Vienna.This was made possible by Countess Csaki, who directed her to significant names in elite Viennese art circles.Among other things, she landed in the class of the leading representative of the Austrian biedermeier, Ferdinand George Valdmiller, as the first Serb woman who ruled paintbrush deftly.Born in Vesprem near Stoni Beograd ( Sekesfeharvar ) as one of six children in a Serbian family, she didn't speak her native language, but this was not an obstacle in her associating with the Serbian Viennese circle.The Serbian Writer Sima Milutinovic Sarajlija, initally her fiance and them simply a blood brother, dedicated to her his Poem Trojesestarstvo.


She was so committed to painting that she never married, but some of her beautiful male models, like Danilo Danic, 1846, were not not by coincidence bathed in the wamth of the painter's perception.There followed trips to Paris, Holland, Italy, a sojourn in Belgrade, studies in Munich, and later the decision to spend the rest of her life in Stoni Beograd, and not to be forgotten, she was elected in Belgrade as the honourary member of the Serbian Learned Society, the precursor to the Academy of Sciences.She is interred in the Serbian capital, in the New Cemetery in Belgrade.As an act of gratitude for her bequest to the National Museum, her remains were moved to Belgrade from Stoni Beograd in 1967 by members of the Society of the Friends of the National Museum in Belgrade.The Artistic legacy of Katarina Ivanovic numbers oly 35 preserved works, but that is more than enough to determine and value their significance for the development of modern Serbian Painting.The influence of the Vienna school and the governing biedermeier taste in Middle Europe influenced one portion of her paintings.Grasping the messages of leading indivuals of the Vienna Academy: Valdmiller, Friedrich Amerling, Leopold Kupelvizer, Joseph Dannhauser, Peter Kraft - Ivanovic conquered, first and foremost, master of realistically respresenting matter; two of her autoportraits are done in the best manner of  Valdmiller ( 1836 )


A contemporary of the civil epoch and its concomitant tastes, Katarina Ivanovic accepted all of its challenges.The Portraits of Sima Milutinovic ( 1840 ), Persida KaraDordevic, Young man with Letter, 1847-1850, were rendered with the expectation that they be represented faithfully, naturalistically, but also secretly idealized.Perhaps not an entirely original composition, Italian Winemaker ( 1842 ) thematically approached the biedermeier.Katarina Ivanovic was among few Serbian painters to accept these genre-scenes in the wa that civil painters from 19th century Middle of the 17th century.Death of a Wealthy Woman, Death of a Poor Woman, Woman with letter in her Boudoir even artist in her studio 1860-1865, speak of Ivanovic's refined intelligence.The controlled representation of grapes bear witness to her exemlary trade skilss, and an emphasized precision in using brushes, 1855-1860,1867.


The defining turning point occured in Munich not onl her studies, but in her encounters with reverberations of contemporary artistic events in other European centres.Some paintings that were drawn in Munich or begun there were later completed in Sekesfehervar.A fateful experience for her was the one with some of the Belgian and Antwerpian historical painters, Louis Galea and Eduard De Bief, inaugurators of future national schools in many European countries.And so Ivanovic had by 1844745 already been awarded in Munich for her work The Conquest of Belgrade ( Liberation of Belgrade in 1806 ), a large dramatic panel dedicated to the First Serbian Uprising.Some 30 years later, the solutions in the matrix of Galeo and De Bief's compositions would be revisited and reinterpreted through a romantic intonation of the theme : Greeting the Serbian Jelena, the Hungarian Queen, Turkish Emissaries Propose to Mara, The Oath of King Matija, The Patriach of Constantinople Imprecates Luxury ( 1865 -1873 )

In works completed with Patience, from a Viennese era, one could tear the sonorous demands for a more beautiful world, which characterized the biedermeier period.The Munich inspiration, more in terms of theme, revealed also her romantic sensibilities and were a harbinger of the upcoming tendencies of  Serbian Art

From
Three Century of Serbian Painting, Miodrag Jovanovic
Posted by Theodoré at 2:14 PM