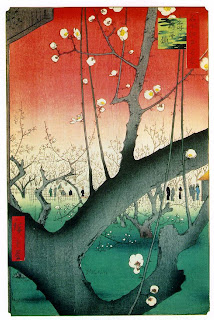 Plum Estate, Kameido
From "One Hundred Famous Views of Edo"
1857
Woodblock print
13 1/4 x 8 5/8 in.
The Brooklyn Museum
Utagawa Hiroshige: Ukiyo-e printmaker, painter. Was admitted at the age of fifteen to the studio of Utagawa Toyohiro (1773-1828), an artist with a preference for classical and landscape subjects. Also studied Nanga painting under Ooka Umpo, a pupil of Tani Buncho. In 1812 he adopted the name Hiroshige. The first prints to be published under his own name were bijin ga, a few surimono and landscapes in small format. It was only after 1830 that he started making landscape prints in oban format. In 1832 he accompanied the annual procession from Edo to the emperor in Kyoto along the Tokaldo which resulted in his famous series 'Fifty three stations of the Tokaido'. Many highly successful series would follow such as 'Hundred views of famous places in Edo' and his last and posthumously published series 'Thirty six views of mount Fuji'. Huge editions of his prints were generally made, and only the fine early impressions do full justice to Hiroshige's artistic talents. Hiroshige's work was very popular in the West during the late nineteenth century and definitely influenced the Western view of Japan.