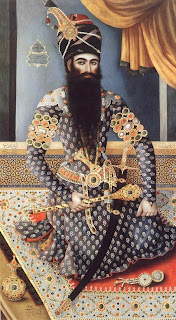 Fath Ali Shah was particularly receptive to ancient Iranian influences, and numerous rock reliefs were carved in neo-Sassanian style, depicting the Qajar sovereign in the guise of Khosroe.

The best known reliefs are at Chashma-i-Ali, at Taq-i-Bustan, and in the vicinity of the Koran Gate in Shiraz.Under Fath Ali Shah there was a clear return to tradition; however, at the same time late 18th century European court style appeared in the palaces in Tehran. European influences also mingle with Sassanian and neo-Achaemenid themes in the carved figural stucco of this period (as can be seen in many houses in Kashan). 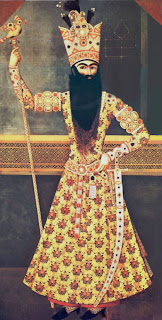 Fat'h Ali Shah Qajar
by Mihr 'Ali (1813-14)
Fath Ali Shah also used large-scale frescoes and canvasses to create an imperial personal image. Portraits of princes and historical scenes were used to adorn his new palaces and they were often shaped like an arch in order to fit into a space in the same shape on a wall. Fath Ali Shah also distributed several paintings to foreign powers such as Russia, Britain, France and the Austro-Hungarian Empire. 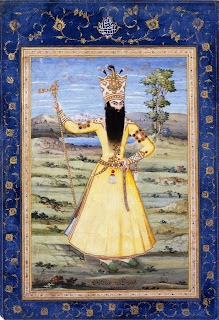 The interaction of popular style and European influence is even more evident in painting, with Flemish and Florentine elements appearing in the painting of the dancer "Mazda" by Madhi Shirazi (1819-20).With the introduction of printing and large scale painting some of the finest Qajar miniature artists turned their hand to lacquer work such as book bindings, caskets, and pen boxes (qalamdan). The style is in particular cosmopolitan and characteristic of a court that attempted to combine the styles of Persepolis, Isfahan and Versailles. 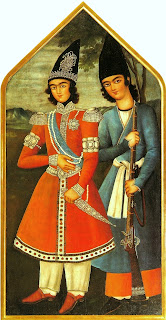 Qajar prince and his attendant
c. 1820

In the second half of the 19th century Nasir al Din Shah, as well as collecting European artworks supported a local school of portraiture which abandoned the style of Fath Ali Shah in favour of a European-influenced academic style. The works of these local artists ranged from state oil portraits to watercolours of unprecedented naturalism.Photography now began to have a profound impact on the development of Persian paintings. Soon after it was introduced into Iran in the 1840s, Iranians promptly adopted the technology. Nasir-al Din Shah's Minister of Publication, I'timad al-Saltaneh, claimed that photography had greatly served the art of portraiture and landscape by reinforcing the use of light and shade, accurate proportions and perspective. 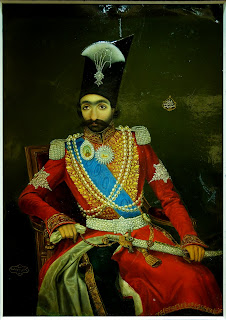 In 1896 Nasir al-Din Shah was assassinated and within ten years Iran had its first constitutional parliament. This period of political and social change saw artists exploring new concepts, both within and beyond the confines of imperial portraiture. 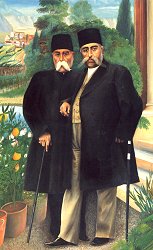 In the double portraiture of Muzaffar al-Din Shah the prematurely aged ruler is shown resting one arm on a cane, the other on the supporting arm of his Premier. The artist here conveys both the frail health of the Monarch and the Monarchy. 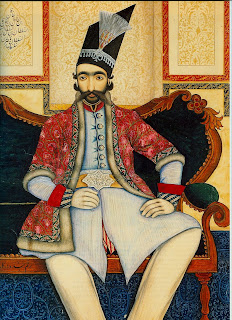 Portrait of Nasir al Din Shah
By Muhammad Isfahani
1850's
The most important artist of the late Qajar period was Muhammad Ghaffari, known as Kamal al-Mulk (1852-1940) who championed a new naturalistic style.