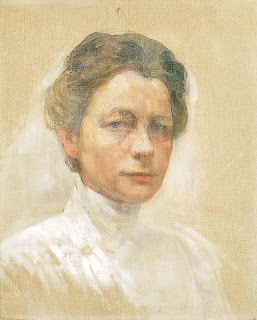 Ivana Kobilca:  Self-portrait in white - 1880s - 1890s
Ivana Kobilca (20 December 1861 - 4 December 1926) was a Slovene realist painter who lived, worked and studied in various European cities including Vienna, Sarajevo, Berlin, Paris and Munich. She was a member of Société Nationale des Beaux Arts in Paris. Many of her paintings are still lifes, portraits or country settings. She later tended toward impressionism. 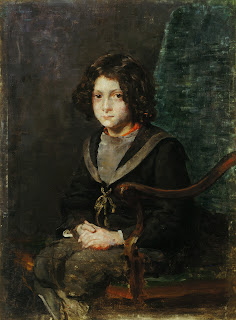 Ivana Kobilca is the most important Slovenian female painter. Judging by her social origin, way of living, ideals and work, she was an urban artist. She is one of Slovene realists, who created their most important paintings in the 1880s. Kobilca's greatest tribute to Slovenian art was made during the time she lived abroad. Her greatest impact was on figural painting, especially portraits and paintings of typical people's lives in rustic or urban places. Since the time she had spent in Berlin, her most important genre became floral still life. Her early work reflects characteristics of München studio-work. The main colors are dark and brownish, only the pastels are light and rosy. From 1889 onwards her painting became lighter with blue nuances, typical for Parisian art at the time.
Posted by Theodoré at 8:56 AM