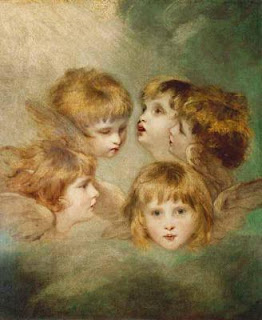 Our thoughts of angels are naturally connected with thoughts of children. Jesus once spoke of the little ones as those whose angels always behold the face of the heavenly Father. Their innocence is the best type we have on earth of the purity of beings of a higher sphere.Often when we try to describe the beauty of some little child, we use
the word angelic.

This explains why Sir Joshua Reynolds when called to paint the portrait of a little girl conceived the pretty fancy of the picture of Angels' Heads.[11] The child's fair face suggested that of an angel.She had golden hair and blue eyes, and a very sweet little mouth. It was a face which was so charming from every point of view that he
painted it in five positions. Grouping the heads in a circle, he added wings after the manner of the cherubs of the old Italian masters, surrounded them with clouds, and lighted the composition with a broad ray of light streaming diagonally across the canvas.

The child's hair falls about the face in straight dishevelled locks, and it is not easy to tell at once whether it is a boy or a girl. In reality the original was little Miss Frances Isabella Ker Gordon, only child of Lord William Gordon and his wife Frances.

In each position of the five heads the expression varies, and looking from one to another, we may trace through the series the child's changing moods. Let each face tell its own story, and perhaps we may learn something of the workings of the mind behind it.

Here at the lower left side the child suddenly sees some new object, a strange bird or flower, and fixes her eyes upon it. She has a wide awake, inquiring mind, quick to notice all that life has to offer, and she is now in an observing mood. The expression of the face just above is very thoughtful and perhaps a little puzzled. Life brings many hard questions to the serious child, and this is one of the little girl's pensive moods. The two upper faces at the right show quite another expression. The lips of both are parted, and they seem to be singing.One is reminded of the rapturous faces sometimes seen among choir boys when the music lifts them out of their surroundings. All childish troubles and questions are forgotten, as the two faces, flooded with light, seem to look into the glory of heaven.

And now the head is turned and the child gazes directly out of the picture with far-seeing eyes. The expression is of perfect contentment. It will be noticed that the position of the last head is precisely like that of Master Bunbury, and there are points of resemblance between the two faces. The mood and expression are, however, quite unlike in the two children. The boy's eyes are directed towards some actual object, but the eyes of the child here are those of a dreamer fixed upon some vision of the imagination.