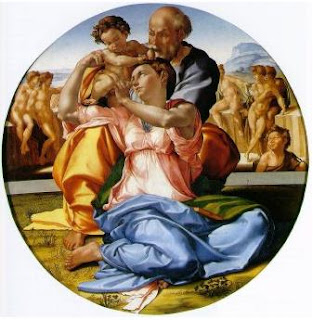 This picture of the Holy Family is from an oil painting. It shows us a glimpse of the home life of the child Jesus. We have already seen in the bas-relief of the Madonna and Child how thoughtful a mood was sometimes upon the mother and her boy. In this picture they are making merry together. The mother, seated on the ground, tosses the boy with her strong arms, for her husband Joseph to catch. She is a beautiful woman, large, and full of life and vigor. The boy is a healthy, happy child, with perfect confidence in his mother. He rests his fat little hands on her head to steady himself.

Joseph, bald and gray, takes the play a little more seriously, as he gently lifts the boy from the mother's arms. He has a special care for the child. It was he who was warned by an angel in a dream that it was dangerous to remain in Judæa. It was he who "took the young child and his mother by night and departed into Egypt."[13] It was he again who duly brought them back to their native country when the cruel king
was dead who had threatened the child's life. After the return from Egypt Joseph and his family settled in the little town of Nazareth, where he followed the trade of a carpenter.

Now Jesus had a cousin, a boy who was not far from the same age. His name was John, and his mission in life was closely connected with that of Jesus. He was to grow up a great preacher, and finally to lead people to Jesus himself. His parents knew before his birth, from an angelic visitation, that he was to be a prophet. His mother Elizabeth, and Mary the mother of Jesus, used to talk together, before their children were born, of the strange future in store for them. We like to think that the two boys grew up as companions and playmates.

It is this little boy John who is seen in the back of the picture, at the right, coming up as if to join the child Jesus in his romp. We see his eager little face, with the long hair blown back from it, just above the coping stone surrounding the garden inclosure which the Holy Family occupy. He carries over his left shoulder a slender reed cross, such as is given him in all the old works of art as a symbol of his prophetic character.

You may say when you look at the picture that this is such a group as you might see any day in some Tuscan village. The people are indeed very plainly of the peasant class, and the artist did not go far out of his way to find his figures. Perhaps he thought this was after all the best way to show that the Holy Family was not unlike other families in enjoying the simple pleasures of home life. We may feel a
closer sense of kinship with them on that account.

In studying the artistic qualities of this picture we have to remember that Michelangelo was more of a sculptor than a painter, and that he went to work upon a painting with the same methods he used in marble.The central figures are grouped in a solid mass as if for a bas-relief, as we may see by comparing this illustration with that of
the Madonna and Child. The mother's arms are so "modelled," to use a critical term, that they seem to start out from the canvas "in the round," just as if cut from marble. The folds of her dress, as well as those of Joseph's garment, are arranged in the long beautiful lines artists call "sculpturesque."

The sculptor's methods are also plainly seen in the peculiarity of his background. In a picture of this kind most painters would have painted there a landscape, but Michelangelo did nothing of the kind. Instead there is a semicircular parapet upon which five slender unclothed youths are playing together. Three sit upon the wall and two lean against it.

The figures bear no relation to the story of the picture. They are introduced merely for the sake of decoration. To Michelangelo there was nothing so beautiful in decoration as the human form. The lines made by different positions of the body trace patterns more beautiful, he thought, than any arabesques. The Greeks had the same idea when they decorated the pediments of their temples with bas-reliefs of nude figures. Applying this principle of sculpture to his painting, Michelangelo arranged these boys so that their slender limbs intertwine in graceful patterns, making a decorative background to fill in the picture. The lightness and delicacy of the design heighten the effect of solidity in the figures of the foreground, giving them the prominence of figures in relief.

Email ThisBlogThis!Share to TwitterShare to FacebookShare to Pinterest
Labels: Critism on Michelangelo, Michelangelo, The Holy Family