The Creation of Adam

The Creation of Adam

Science has long been trying to solve the problem of the origin of the human race. Great books are published by learned men to explain how the being called man came to be what he is. But centuries before the beginnings of science a wonderful poem was written on the same subject of the creation. This poem is called Genesis, that is, the Birth or Origin of things, and it forms a part of the first book of our Bible.Ever since it was written it has been one of the sacred books of many people.

This story of creation was once the favorite subject of artists. In the period before the invention of printing, people depended for their instruction upon pictures about as much as we now do upon books.Painters sometimes covered the walls and ceiling of churches with illustrations of the book of Genesis, transforming them into huge picture-books, from which the worshippers could learn the Bible stories which they were unable to read in books.

Michelangelo was one of the last Italian painters to do this, and he profited by all the work that had been done before to make the grandest series of Genesis illustrations ever produced. It is from this series that our illustration is taken, representing the subject of the Creation of Man. The painter did not try to follow the text
very literally. In the book of Genesis we read [19]

"And God said, Let us make man in our image, after our likeness: and let them have dominion over the fish of the sea, and over the fowl of the air, and over the cattle, and over all the earth, and over every creeping thing that creepeth upon the earth.

"So God created man in his own image, in the image of God created he him.... And the Lord God formed man of the dust of the ground, and breathed into his nostrils the breath of life; and man became a living
soul."

Michelangelo takes these words, and expresses, in his own way, the supreme creative moment when "man became a living soul."

The man Adam lies on a jutting promontory of the newly made land. Though his body is formed, he lacks as yet the inner force to use it; he is not yet alive. The Creator is borne along on a swirling cloud of
cherubs, moving forward through space like a rushing mighty wind.Perhaps the painter was thinking of the psalmist's beautiful description of God's coming:[20] "He rode upon a cherub, and did fly:
yea, he did fly upon the wings of the wind." 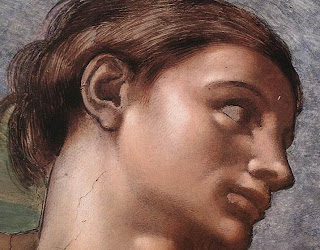 Face of Adam
The Creation of Adam

In His fatherly face is expressed the good purpose to create a son "in his own image." The cherubic host accompanying him are full of joy and awe. We are reminded of that time of which the poet Milton
wrote,[21] when

"All
The multitude of angels, with a shout
Loud as from numbers without number, sweet
As from blest voices, uttering joy,--Heaven rung
With jubilee, and loud hosannas filled
The eternal regions."


The sign of the Almighty's creative power is the outstretched arm extended towards Adam with a superb gesture of command. As if in answer to the divine summons, the lifeless figure begins to stir, rising slowly to a sitting posture. The face turns towards the source of life as the flower turns to the sun. The eyes are lifted to the Creator's with a wistful yearning. It is the look we sometimes see in the eyes of a woodland creature appealing for mercy. It is such a look as might belong to that imaginary being of the Greek mythology, the
faun, half beast, half human. Thus Adam, still but half created, begins to feel the thrill of life in his members, and is aroused to action. He lifts his hand to meet the Creator's outstretched finger.The current of life is established, the vital spark is communicated, and in another moment Adam will rise in his full dignity as a human
soul.

This picture was painted long before there was any knowledge of electricity, of electric sparks, and electric currents. Yet, if we did not know otherwise, we might fancy that Michelangelo had some of these wonderful ideas of modern science in mind, as the symbols of the great thoughts he was trying to express.

The picture suggests to our latter day scientific imagination that God's currents of power move as silently, as swiftly, as invisibly and mysteriously as the currents of electricity. The painter meant to show that the work of creation was not a mechanical effort of the Almighty, but that with him a gesture, a word, even a thought, brings something into being. 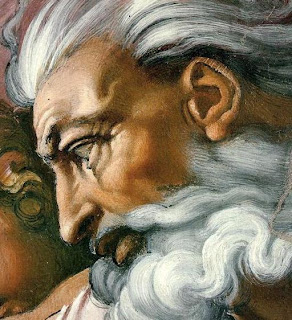 Face of God
The Creation of Adam

The series of which this picture forms a part is painted in fresco on the ceiling of the Sistine Chapel, in the Pope's palace of the Vatican, Rome. To break up the monotony of the long plain surface he had to decorate, the painter divided the strip of space in the centre into nine compartments. These are separated from each other by a painted architectural framework, so cunningly represented that it seems to project from the ceiling like a solid structure of beams.


Our illustration shows a portion of the simulated framework which incloses the picture. On what appears to be a pedestal at each corner is a seated figure representing a statue. One is a beautiful youth with a horn of plenty, and the other is a faun-like creature capering gayly. The purpose of these figures is decorative, like those in the background of the Holy Family.

Email ThisBlogThis!Share to TwitterShare to FacebookShare to Pinterest
Labels: Adam and God, Critism on Michelangelo, Michelangelo, The Creation of Adam