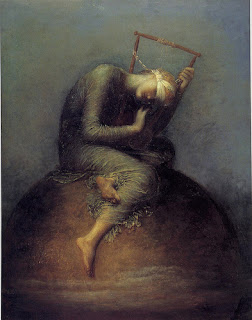 HOPE
At the first glance it is rather strange that such a picture should bear such a title, but the imagery is perfectly true.The heavens are illuminated by a solitary star, and Hope bends her ear to catch the music from the last remaining string of her almost shattered lyre. The picture was painted in 1885 and given to the nation in 1897. A very fine duplicate is in the possession of Mrs. Rushton.]

It was a peculiar difficulty of his nature which led him to insist, on the occasions of the London and provincial exhibitions of his pictures, that the borrowers were to make all arrangements with his frame-maker, that he should not be called upon to act in any way, and that no personal reference should be introduced. Watts always considered himself a private person; he disliked public functions and fled from them if here were any attempt to draw attention to him. His habits of work were consistent with these unusual traits. At sunrise he was at his easel.During the hot months of summer he was hard at work in his London studio, leaving for the country only for a few weeks during foggy weather.


At the age of sixty-nine Watts married Miss Mary Fraser-Tytler, with whom he journeyed to Egypt, painting there a study of the "Sphinx," one of the cleverest of his landscapes. Three years after his return, he settled at Limnerslease, Compton, in Surrey, where he took great interest in the attempt to revive industrial art among the rural population.

Twice, in 1885 and 1894, the artist refused, for private reasons, the baronetcy that other artists had accepted. He lived henceforth and died the untitled patriot and artist, George Frederick Watts.