Mrs. Siddons as the Tragic Muse 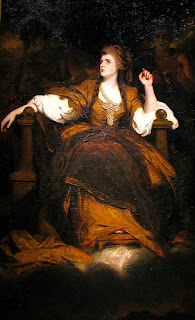 Mrs. Siddons as the Tragic Muse

The name of Mrs. Siddons is one of the most distinguished in the history of English dramatic art. For thirty years she was unsurpassed in her impersonation of the tragic heroines of Shakespeare. Her first great success was in the season of 1782, when she appeared for the second time on the London stage. She was then about twenty-seven years of age, and had devoted years of arduous study to her profession.Though gifted by nature with strong dramatic instincts inherited from generations of players, her powers developed slowly. The rôles which she acted were of the more serious sort, which required maturity and experience for interpretation. Her personal appearance was eminently fitted for tragic parts. She had a queenly presence, a countenance
moulded in noble lines, a deep-toned measured voice, and an impressive enunciation. In private as well as in public she commanded the highest admiration. Though all London was at her feet flattery could not spoil
her. Her children adored her, her friends found her the soul of sincerity, and all the world honored her noble womanhood.

It was while she was still on the threshold of her great career that Reynolds painted her portrait as the Tragic Muse.

In the old Greek mythology every art had a corresponding goddess or muse who inspired the artistic instincts in human hearts. There was, for instance, a muse of tragedy, called Melpomene, a muse of the dance, Terpsichore, and so on through the nine arts. The great sculptors used to make statues of these muses, trying to express in each the highest ideal of the particular art represented.

It was in imitation of this old custom that Reynolds conceived the idea that Mrs. Siddons, as the greatest of tragediennes, would appropriately impersonate the muse of tragedy.[9] The story is related that when she came to his studio for the first sitting the painter took her by the hand and led her to the chair, saying in his courtly way: "Ascend your undisputed throne; bestow on me some idea of the tragic muse." Whereupon she instantly assumed the attitude in which she was painted. Among Michelangelo's frescoes in the Sistine Chapel
there is a figure of the prophet Isaiah, whose pose is quite similar, and may have suggested both to painter and sitter the idea of the Tragic Muse. In any case the attitude which Mrs. Siddons assumes is entirely characteristic.


The expression of her face shows the stress of strong emotion the struggle of a noble soul in a conflict of forces which must end in tragedy. Her hair is brushed back from the face and ornamented with a tiara like a royal diadem. A rich rope of pearls falls across her beautiful neck and is gathered in a knot on her bodice. A mantle lies
across her lap draped somewhat like that in the portrait of Lady Cockburn, and, like it, inscribed with the name of the painter, who gallantly said that "he could not resist the opportunity of going down to posterity on the hem of her garment".[10]

Behind her chair are two allegorical figures representing Crime and Remorse, the two primary causes of tragedy. In the full face of the one at her left we can trace the features of Sir Joshua himself, distorted though they are into the expression of a criminal.

The color of the original painting has a sombre magnificence which is in keeping with the seriousness of the subject. The painting of the head and bust places it among the finest works of Reynolds.

The portrait shows a remarkable insight on the part of the painter into the character of Mrs. Siddons. She had not at that time played any of her great Shakespearean rôles, but Reynolds seemed to anticipate her power. He followed her career with unfailing interest and always made a point of attending her first appearances and benefits, sitting among the musicians in the orchestra. When she prepared for the character of Lady Macbeth he helped her plan the costumes and sat rapt and breathless during her first performance. This was generally considered her grandest effort, and she used herself to say that after playing it thirty years she never read over the part withoutdiscovering in it something new. In this character she bade farewell to her profession June 29, 1812. It was said by a contemporary critic that "there was not a height of grandeur to which she could not soar, nor a darkness of misery to which she could not descend; not a chord of feeling from the sternest to the most delicate which she could not cause to vibrate at her will."

[Footnote 9: Russell had already celebrated Mrs. Siddons as the Tragic Muse in his History of Modern Europe, and Romney had previously painted Mrs. Yates in the same character.]

[Footnote 10: The compliment has sometimes been referred to the portrait of Lady Cockburn, but the incident is related by Northcote as told him by Mrs. Siddons herself in regard to her own portrait.]
Sir Joshua Reynolds by Estelle M. Hurll
Posted by Theodoré at 6:29 AM